Having grown up around central Ohio I’ve developed certain ideas about what “the ground” is and how to identify it at a glance. For example, I know that the ground is flat. Super flat. Like, always. It is full of clay and small rocks, dense, rich, and deep. Underneath the ground is limestone, which is sometimes above the ground where the ground has eroded. Remarkable.

All of these brilliant observations tend to hold true as long as I don’t travel more than an hour or so away from home. Indeed, many Ohioans will agree with my assessment of the ground. But only the ones who live in the Western half of the state. This is glacier town, baby. 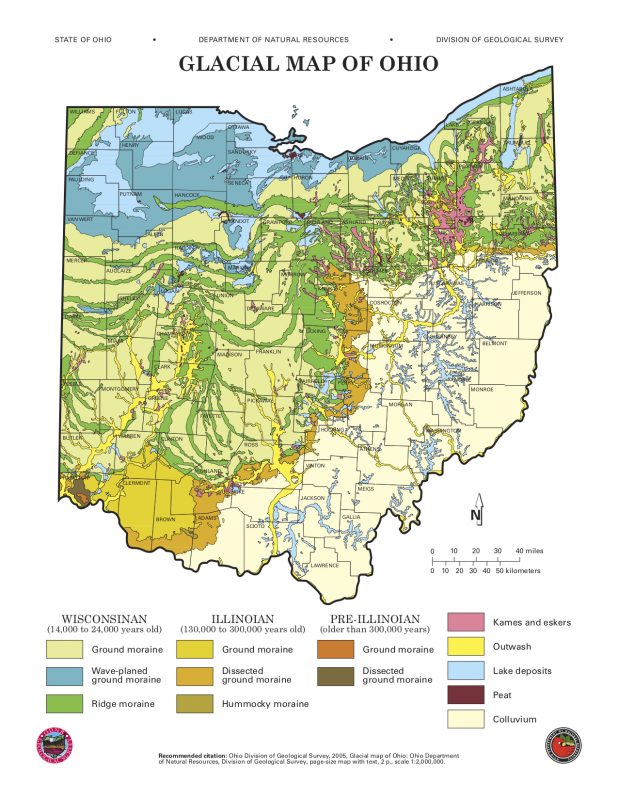 Here’s a nifty and excruciatingly detailed map from the ODNR showing a clear delineation between glaciated (West) and unglaciated (East) territory. Colluvium is a broad term for material that accumulates at the base of steep slopes, or in this case glaciers.

Our recent Eastward excursion to the Hocking Hills area proved that our idea of “ground” is perhaps not as universal as we might hope. Western Ohio was thoroughly steamrolled by glaciers and remains pancake-esque to this day. This shearing and flattening process wiped out the younger upper and middle layers of Ohio’s bedrock – sandstone and shale respectively – leaving only the bottom limestone layer behind in their icy path. The glaciers are also responsible for depositing a deep and rich layer of glacial till on top of that limestone which, according to Dr. Jane L. Forsyth in her essay “Linking Geology and Botany”, is “an unsorted mixture of sand, silt, clay, and boulders… accumulated directly by the melting of the ice.” Hence, clay and lime-filled, rich, poorly drained Western Ohio soil.

So what’s the deal with Eastern Ohio, like in Hocking Hills? In short, less till, acidic soil, better drainage and drier habitats, and hills and sandstone cliffs! The ground goes up and down instead of, well, not. For us, this means an entirely new roster of plant inhabitants that are well suited to the drastically different environment. “Like what?”, you’re probably asking. As if I would even tell you. 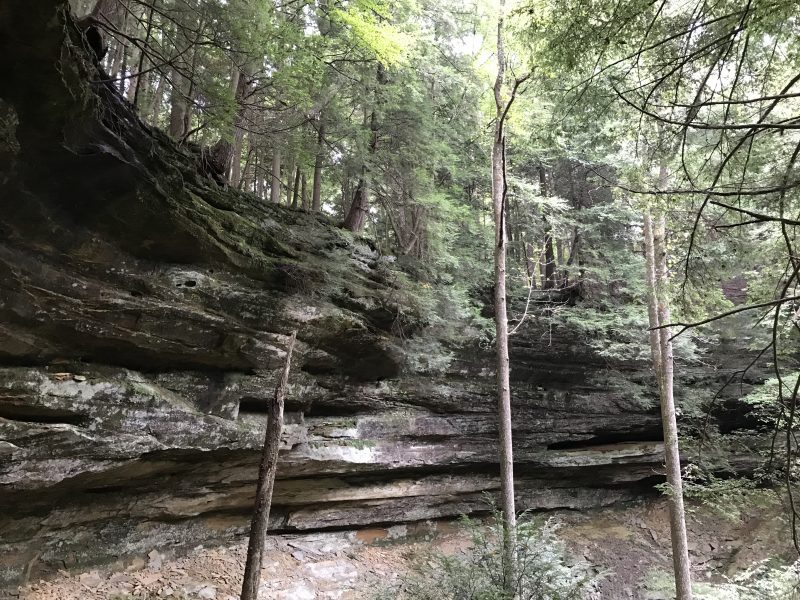 …fine. Here’s dwarf chestnut oak, Quercus pinoides. Unlike in higher pH environments in which one might find chinquapin oak (Quercus muehlenbergii) growing instead, the dry and acidic soil in Hocking Hills is great for these little guys. The “little” here refers to their shrubby growth habit, as opposed to adopting a more extravagant tree lifestyle. 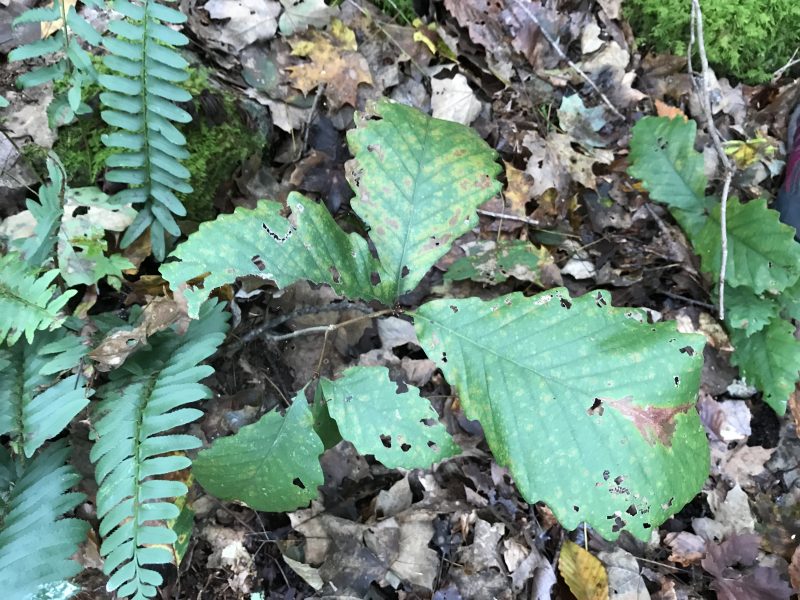 A dwarf chestnut that also happens to be small.

Here’s a candid branch photo of another regular patron of sandy and acidic hangouts – Eastern hemlock, Tsuga canadensis. Our friend and literary guide through this neck of the woods, Dr. Jane L. Forsyth, calls it out specifically as a species well-suited to these conditions. The hemlocks we encountered tended to dominate the forest in pockets. They enforce a fairly strict no-undergrowth policy via their intensely shady canopy. 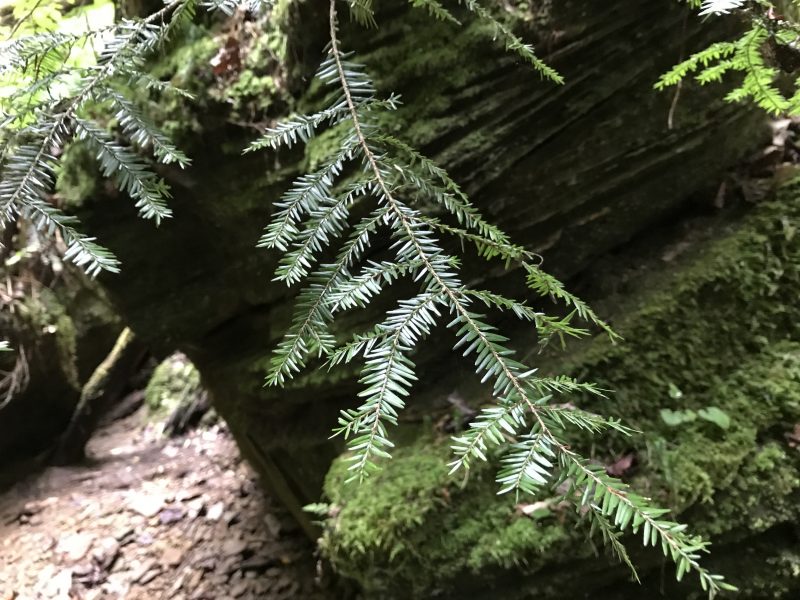 You should have seen these hemlocks. The trees looked like this, but more of them. And tall.

Another tree brought to you by the letter Acid, sourwood (Oxydendrum arboreum)! To my knowledge I don’t think I’ve ever seen this one before. Then again, it’s not exactly a standout as far as big leafy things though. I appreciate trees with names that could convince a normally very reasonable person that tasting or otherwise consuming the tree might be rewarding. I guess I just like to imagine curious people over the years cautiously licking bark or leaves and walking away splintered and disappointed. Sourwood, honey locust, sweetgum, sugar maple…we do this to ourselves. 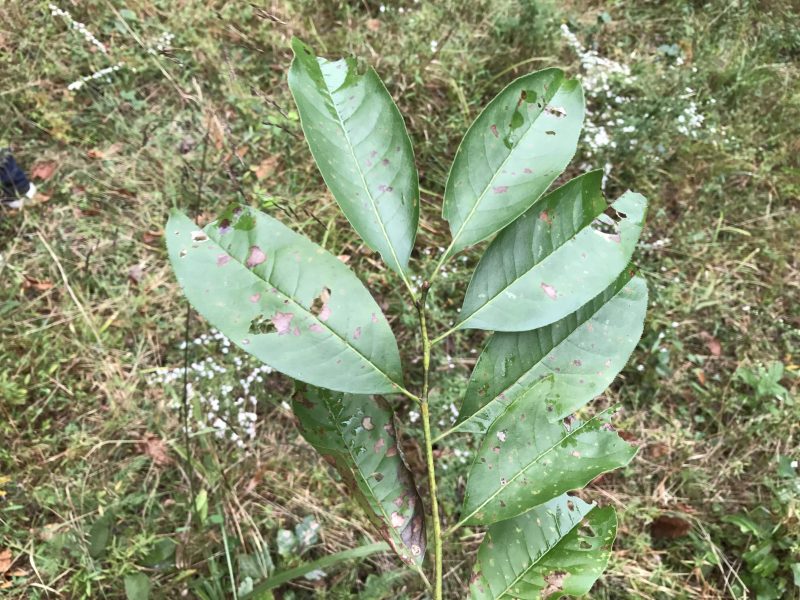 “It doesn’t look as edible as it sounds.”
– Boring people who are quitters.

First on our list were beechdrops, Epifagus virginiana. Once they were pointed out I realized that we had been encountering them for most of our hike and that I had been overlooking them, assuming they were nondescript dead twigs. After all, plants have leaves and these twig things didn’t have leaves. You need leaves or at least chlorophyll to photosynthesize, right?

So here is the riddle posed to beechdrops by nature: How does one photosynthesize with neither chlorophyll nor leaves? Beechdrops’ response is something along the lines of “Roses are red, riddles are dumb. Photosynthesis is dumb. I’m not going to photosynthesize.” And it didn’t.

The end! That’s the story of how not all plants convert sunlight directly to energy. Whoops! Sorry, biology. So what do beechdrops do? They steal stuff! So rebellious.

Beechdrops parasitize the roots of American beech, Fagus grandifolia, by attaching directly to roots via structures called haustoria. This affords them all of the nutrients they could possibly need, saddling the beech trees with the energetic burden. The trees handle it pretty well, all things considered. The flowers are the part to look out for if you’re walking among beeches in Eastern Ohio – they’re 4-lobed and (kind of) 2-lipped and arranged in a somewhat spaced out spike. Be careful to not confuse them with similar looking species such as dead twigs. They kind of look like dead twigs. 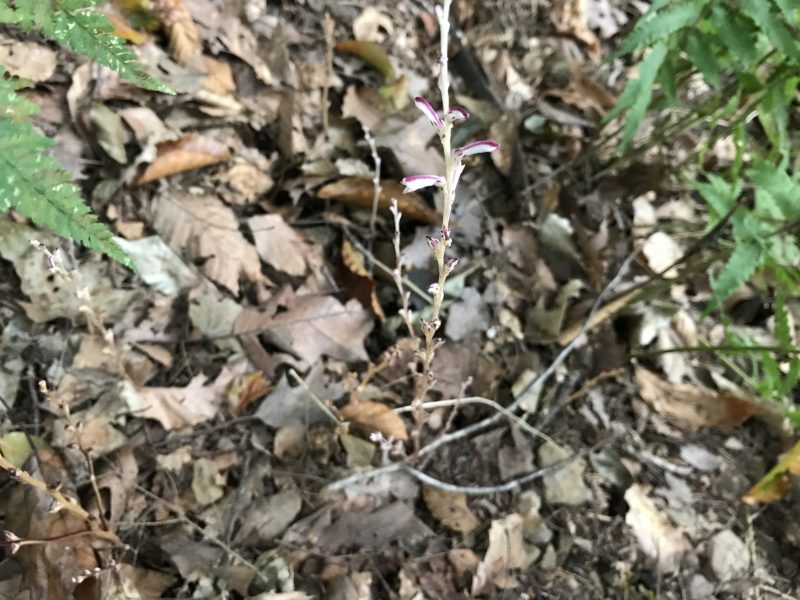 It’s actually growing above a twig, which makes our lives harder and is cheating. Not that beechdrops are worried about playing by the rules.

Beechdrops certainly aren’t the only parasitic plants to eschew photosynthesis, but they are one of the relatively few that don’t even bother to pretend with any amount of chlorophyll.

Check out this unpleasantly-named beechdrop relative, squawroot (Conopholis americana). Actually, I hate that name. Let me look up one of its other common names really quick to use instead. It shouldn’t be hard to find a better one. Give me just a second.

C. americana is another achlorophyllous parasite, this time with a penchant for oak trees. The plant spends most of its time underground and invisible – we only see it when it flowers. Its roots interact directly with oak roots. The blooms are housed within a brown structure that kind of looks like a pine cone if pine cones could come back as zombies. The “Cancer” part of its more culturally sensitive common name comes from the knobby growths that oak roots form in response to the plant’s parasitism. 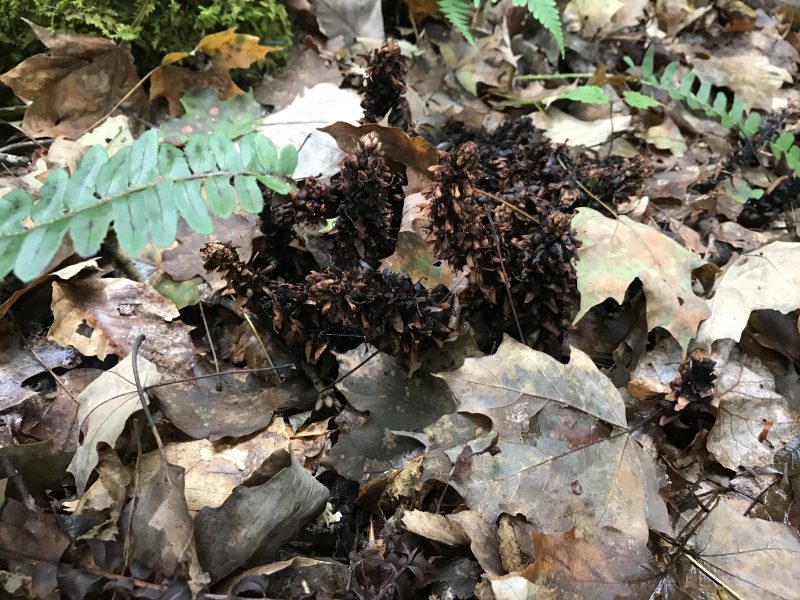 I’m sure it has a great personality.

The last stop on our tour of pasty parasitic plants is Monotropa uniflora, AKA ghost flower, corpse flower, or Indian pipe. When in bloom the spooky-looking (awesome-looking) solitary flowers are white or slightly pink and a bit translucent. They’re decidedly droopy until fruiting, at which point they turn upwards. We happened to catch them in fruit which I had never seen before.

As parasites their M.O. is slightly different from our other two examples. M. uniflora is achlorophyllous and leafless, but rather than parasitizing another plant directly it mooches off of another plant’s mycorrhizae, symbiotic fungi that associate with plant roots and exchange water and nutrients with their associated plant, in this case trees. And sneaky ghost flowers. The strategy employed by M. uniflora is called mycoheterotrophy and it’s totally not fair and utterly fascinating. 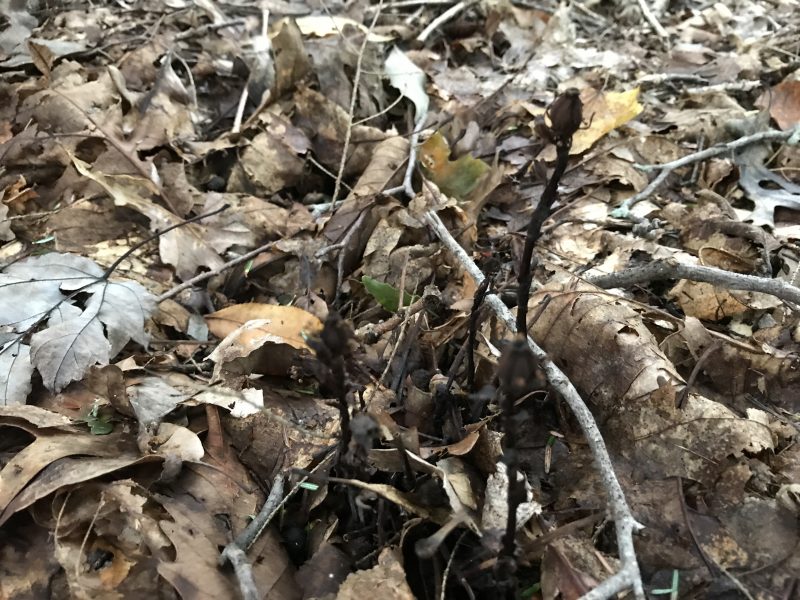 Do you know what else is neat? Mosses. We ran into a pretty special one on our adventure – Tetraphis pellucida. This moss is exciting because, unlike most other mosses, it “chooses” whether it will reproduce sexually via sporophyte development or asexually via gemmae. It determines which mode it will employ based on the density of the surrounding Tetraphis/availability of substrate. Less dense populations mean asexual reproduction in order to “fill in the gaps”. A crowded substrate (which for Tetraphis is usually stumps in advanced states of decay) triggers sexual reproduction and sporophyte formation, the idea being to distribute spores far and wide to colonize new spots while avoiding competition with the existing gametophyte population. Neat! I was able to photograph both Tetraphis lifestyles on the same stump. 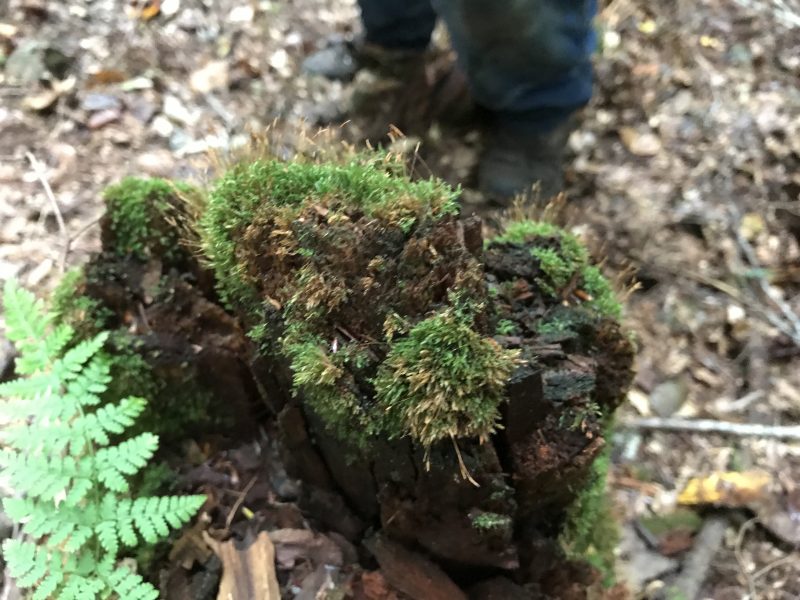 NSFW: A crowded cluster of Tetraphis reproducing sexually, as evidenced by the flagrant display of sporophytes. Plus, somebody’s feet. 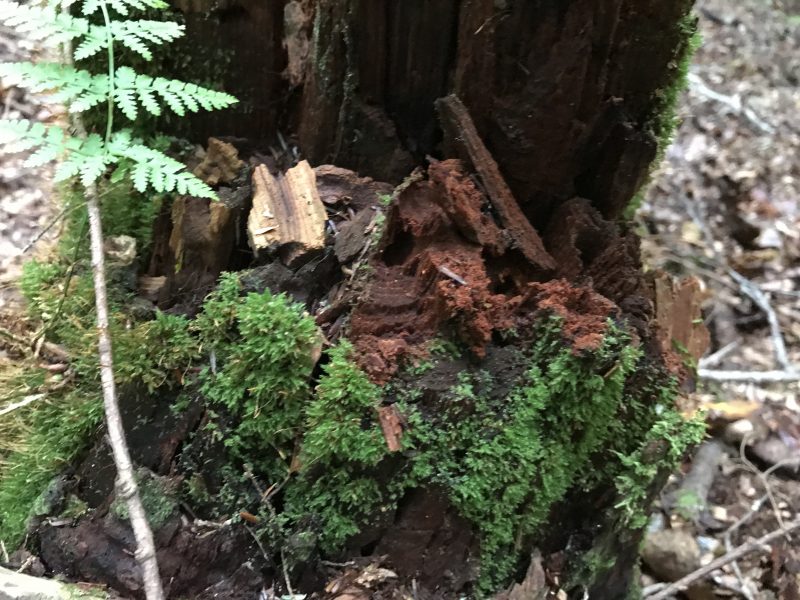 A more modest bunch of Tetraphis making babies asexually without any funny business with the help of gemmae. It’s possible that the recently collapsed portion of the log is enough new real estate to quell their mossy lust.