Why is it so tall and green outside?

Oh right, it’s trees. You know, trees are some of the most conspicuous plants around, but we have a tendency to lump big leafy things into a nebulous “landscape” category in our minds. It’s like we can’t see the trees for the forest. What’s up with that?

The New York Times recently published an opinion piece by Gabriel Popkin that labels this widespread phenomenon as “tree blindness”. Popkin describes tree blindness as something that can and should be cured, and helpfully titled their article “Cure Yourself of Tree Blindness” to drive that point home.

I happen to agree with the author’s stance on tree blindness, though I would point out that it exists alongside many other “nature-blindnesses” suffered by humanity at large. We like to pretend that we live outside of nature’s influence, but we’ll always be entirely at its mercy while it is simultaneously shaped by our actions. It’s important that we cultivate a basic appreciation for the planet’s ecological complexity and diversity, especially given that we are utterly incapable of reproducing it, and use that appreciation and know-how as the driving force behind environmental stewardship.

Popkin alludes to ecological benefits as justification for fighting tree blindness in addition to the idea of personal enrichment. I think it’s equally important to consider the grave and direct risks carried by the affliction if left unchecked. Tree blindness does not bode well for environmental policy and effective corporate regulation. Tree blindness is how we end up with well-meaning(?) groups chucking white pine seedlings into razed forests and calling the ecosystem restored. I know what The Lorax said, but we’re going to have to do a little better than that.

If only we knew where to start…

Oh right, it’s trees. We should learn to identify trees! In stark contrast to regular blindness, tree blindness can be cured by not wanting to be blind anymore.

Just like Popkin says, the trick is just getting out and doing it. Let’s check out some trees that I’ve spotted and attempted to identify recently, still green and leafy here in the beginning of September.

Saving one of the best for first, take a look at this pawpaw, Asimina triloba. By best I mean it’s in fruit right now and it’s a pretty special time for anyone who likes to eat things that taste good. It has simple long, oval leaves with smooth margins in an alternate arrangement. I’ve often heard, and this Washington Post article by Andrew Moore at least confirms the existence of the myth, that George Washington was extremely fond of chilled pawpaw as a dessert. I’m not sure why it seems like so much of George’s mythos is tree-based, but I respect it.

This specimen was found along the Olentangy River Trail, a popular bike path that runs along the river. The Peterson “Trees and Shrubs” Field Guide notes that pawpaws tend to hang out in bottomlands, and in my experience they have a preference for forest edges or other areas with a bit more light than just undergrowth. 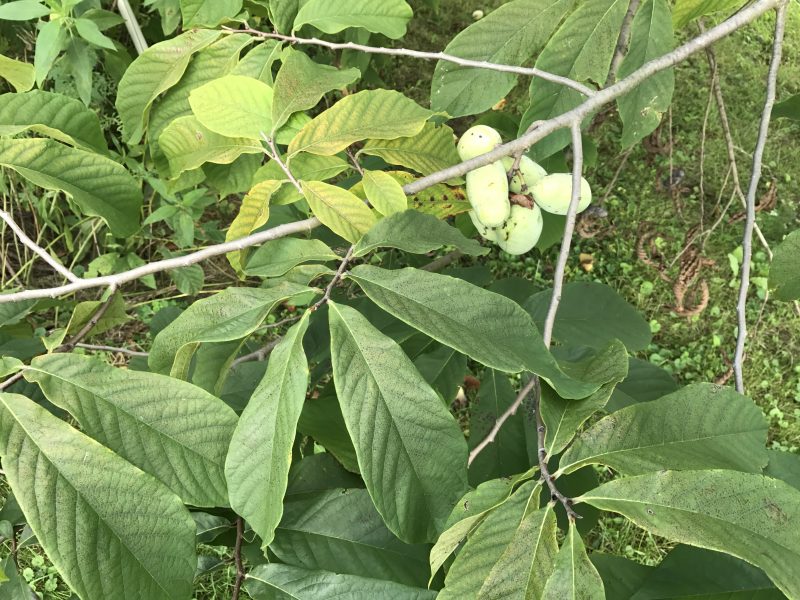 Speaking of simple, alternate leaves but with teeth this time, check out this beech, Fagus grandifolia! Its bark is smooth and a light grey color, with the exception of the messages that this specific tree seems to be displaying on its trunk against its will. Also notable if you come across a beech are its particularly long and pointy buds. This specimen was found in the wet and woodsy Walhalla Ravine, which according to the Peterson guide may correspond with its preference for rich, mature soils.

The only thing pointier on a beech than its buds are its fruits. To paraphrase notes on beech fruits from the Peterson “Trees and Shrubs” Field Guide, bunches of beasts browse beeches. Be it bobwhites, black bears, Bambis, bunnies, or borcupines, better believe that beech’ll be bitten. They’re also enjoyed by bsouthern bflying bsquirrels. I mention them lest we forget that they are actually the most common squirrel species in Ohio. People deserve to know the truth. 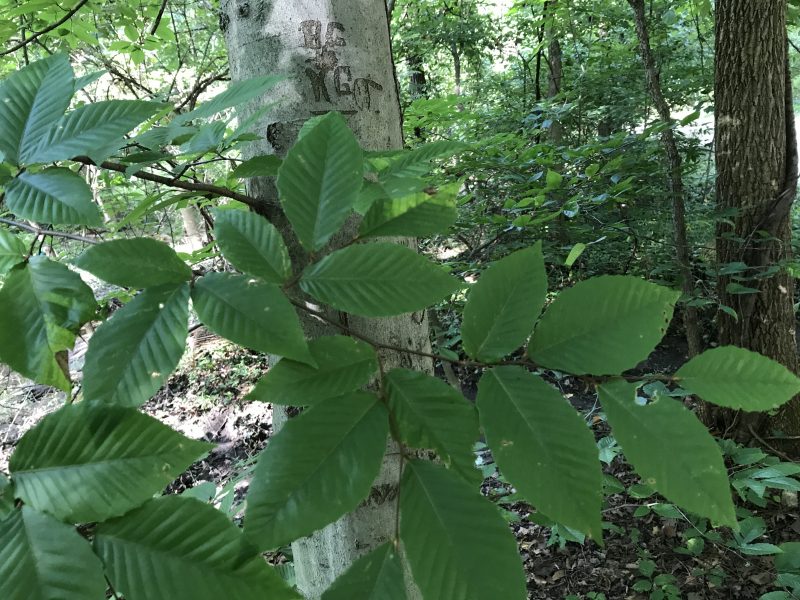 People are often surprised to learn that signed trees are actually worth a lot less than trees in their original packaging.

Speaking of speaking of simple, alternate leaves with teeth but this time double-toothed, get a load of this other Walhalla Ravine resident. Truth be told I’m less confident in this ID and my pictures turned out to be duds when I got home, but this tree stood out thanks to its distinctive bark. I believe it’s Carpinus caroliniana, also known as musclewood or American Hornbeam. The name musclewood comes from the sometimes striped, sinewy appearance of its bark. Definitely one of our more metal trees. It’s also called ironwood, which is also super metal. 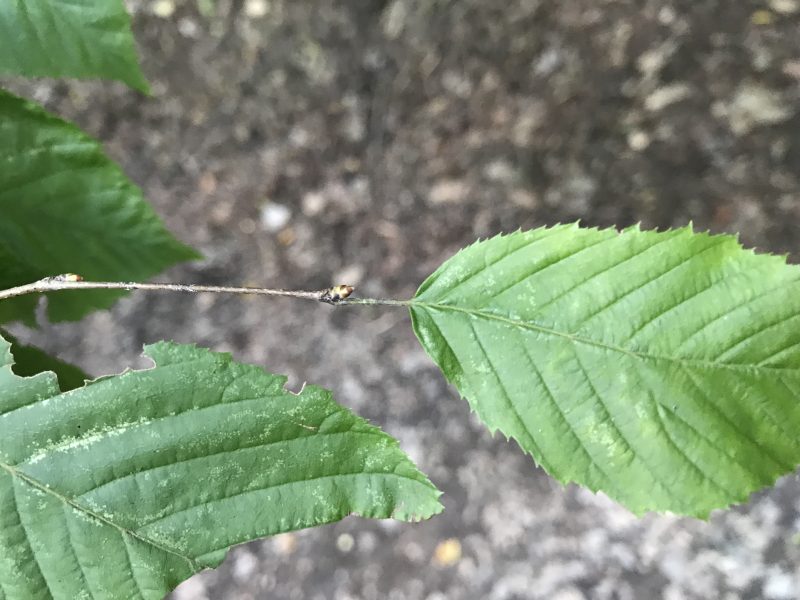 A so-so shot of a double-toothed leaf and bud. 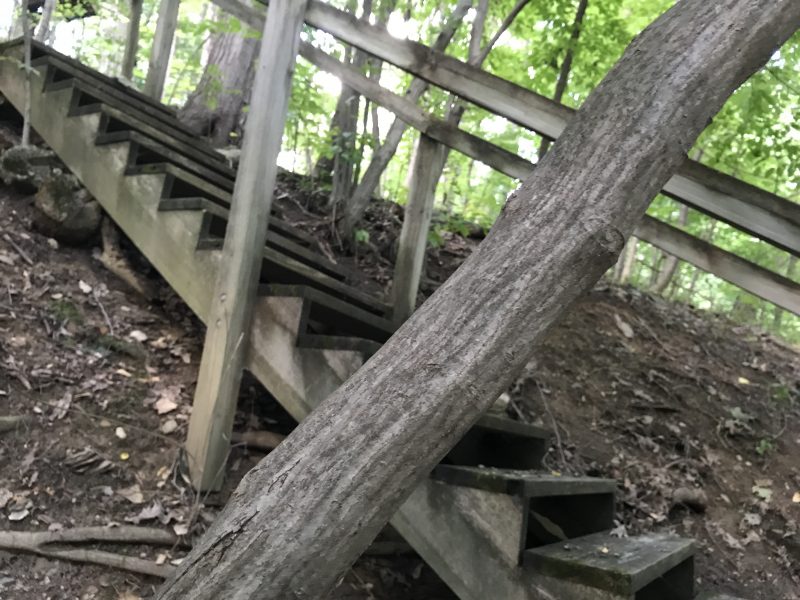 See? Sinewy striation. It looked especially cool wherever branches happened to twist. Too bad I didn’t have some way to record what I was seeing.

Ok, let’s try a different leaf arrangement now. Compound. Palmately compound. Opposite, palmately compound. There was a little Ohio buckeye, Aesculus glabra, growing down in the ravine, and admittedly it could have been planted in the woods by a resident. However, since it is capable of occurring naturally I’ve decided to include it. There are a couple of ways to distinguish Ohio buckeye from the equally native sweet buckeye, Aesculus octandra. One is by stank: Ohio buckeye has a rather unpleasant odor when its twigs are bruised. Another is the presence of (pretty small) thorns on the outer surface of the fruit. A. glabra has little baby thorns while A. octandra is smooth.

Chocolate buckeyes are a rare example of a delicious dessert that has been intentionally designed to resemble a very toxic and easy-to-find seed. Good work, Ohio. Gotta keep the children on their toes. 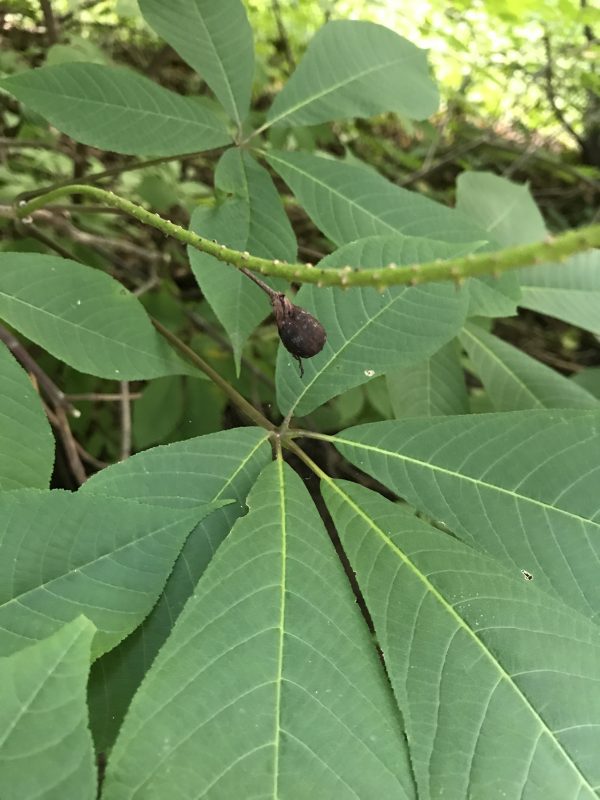 Buckeye leaf detail, plus a dud fruit with the beginnings of tiny thorns barely visible. You’ll get ’em next year champ, buck up!

If we could move back to totally metal plants for a second, I’d like to talk about honey locust, Gleditsia triacanthos. Look. At. Those. Thorns. Also, look at those twice compound and opposite leaves. But now look back to the blood red thorns. I mean honestly. This murder weapon was growing in a dry-ish weedy meadow along the Olentangy River. Can you imagine what kinds of herbivores this thing was gearing up to fend off? Who hurt you, Gleditsia?

A similar plant, water locust (Gleditsia aquatica), can be distinguised from honey locust and its branched thorns by its unbranched thorns. The Peterson guide notes that honey locust sometimes only has once-compound leaves, apparently depending on its age and health, which I think is pretty interesting. 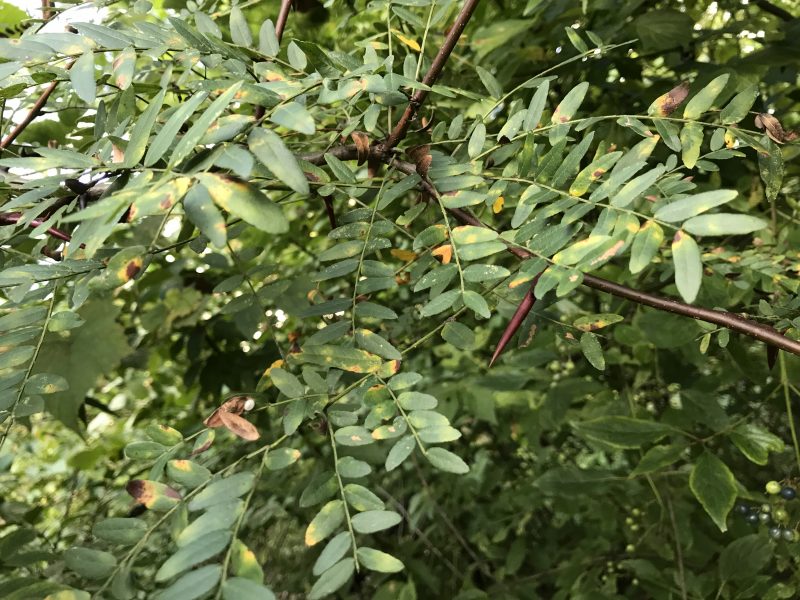 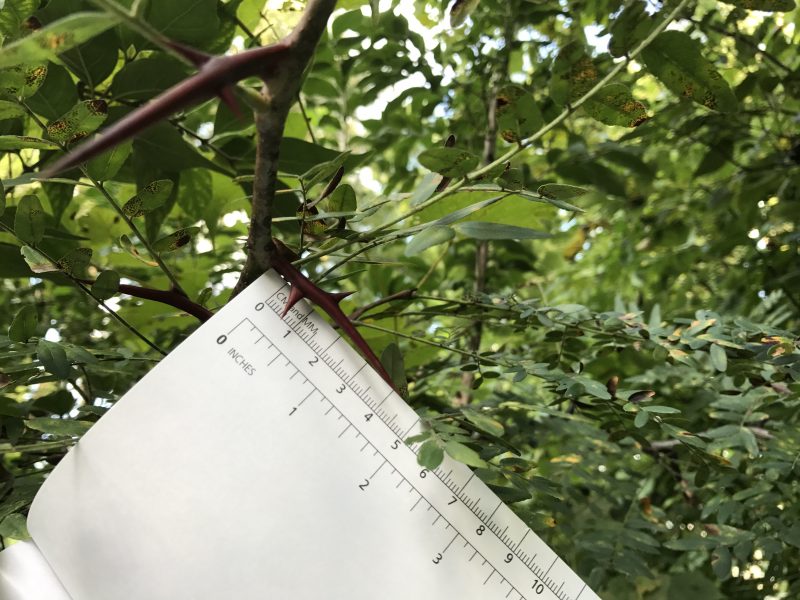 LOOK OUT!!! THEY’RE BRANCHED AND EVERYTHING!!!

This next one, encountered on the edge of Union Cemetery and still pretty close to the Olentangy, threw me for a loop. It had opposite compound leaves like an ash, but wasn’t nearly…ashy enough. I mean, look at how broad the leaves are. And that lobed leaf on the end. I was wondering if it was even included in my field guide, but then I glanced upwards. Fruit! Samaras! At least they looked like maple-y wing-y samaras. It turns out it was a maple in disguise all along – Acer negundo, ash-leafed maple! Sometimes it’s also called box elder which is somehow more and less confusing at the same time. Besides its fruits, its very green twigs/young branches and groups of 3-5 fairly broad leaflets help to distinguish it from actual ashes. By the same token its ash-like qualities distinguish it from other maples which generally have simple leaves. The Peterson guide mentions that syrup can be made from its sap, which makes it maple-y enough in my book. 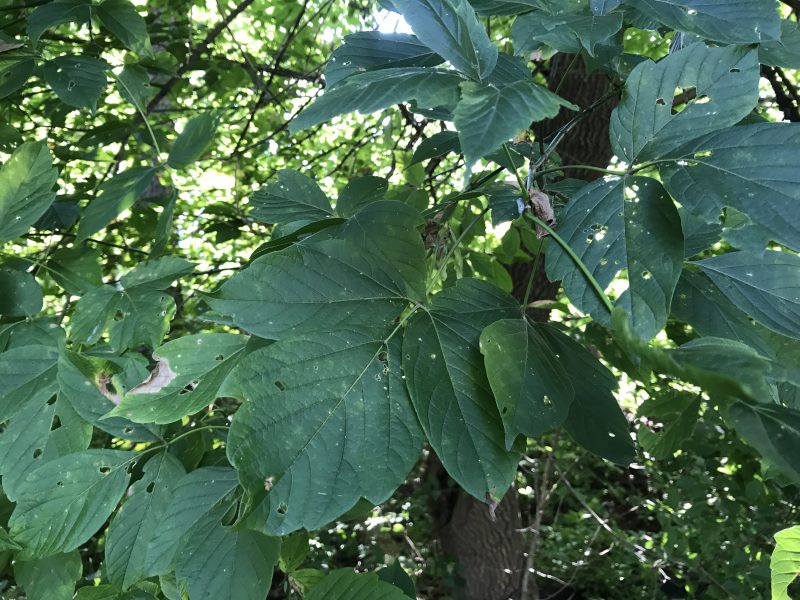 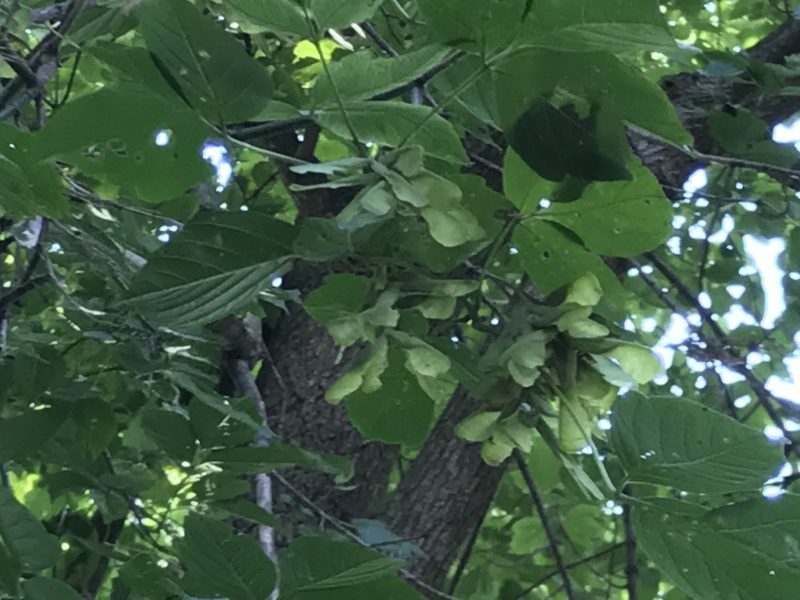 I miss simple, alternate leaves. Let’s go back. Here are, I think, some double-toothed ones: River Birch, Betula nigra. There are other shaggy birches around, and even other shaggy whitish birches (like Betula papyrifera, paper birch) but they tend to have more horizontal stripes and fewer colors throughout their papery bark. This birch was another ravine resident, hanging out in that rich and wet soil. The Peterson guide says that the older bark of some species is useful as tinder because it can be lit even when damp. Neat! 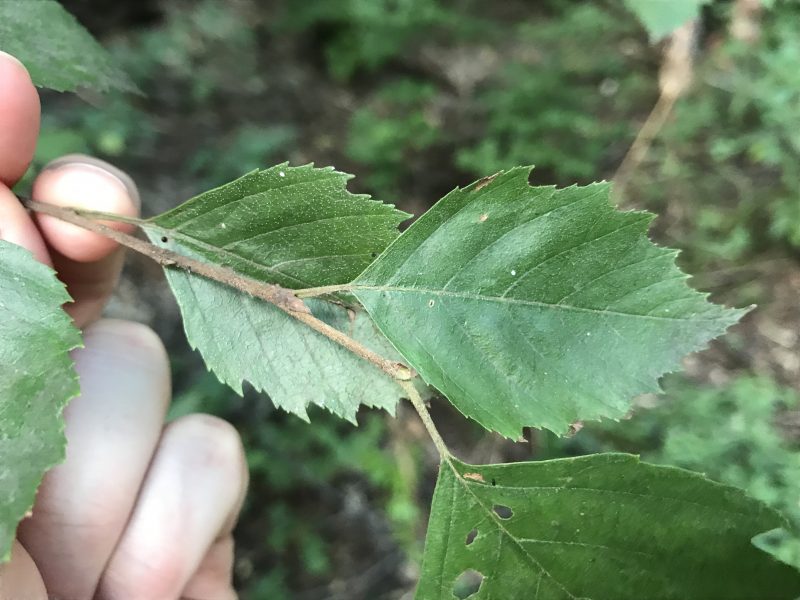 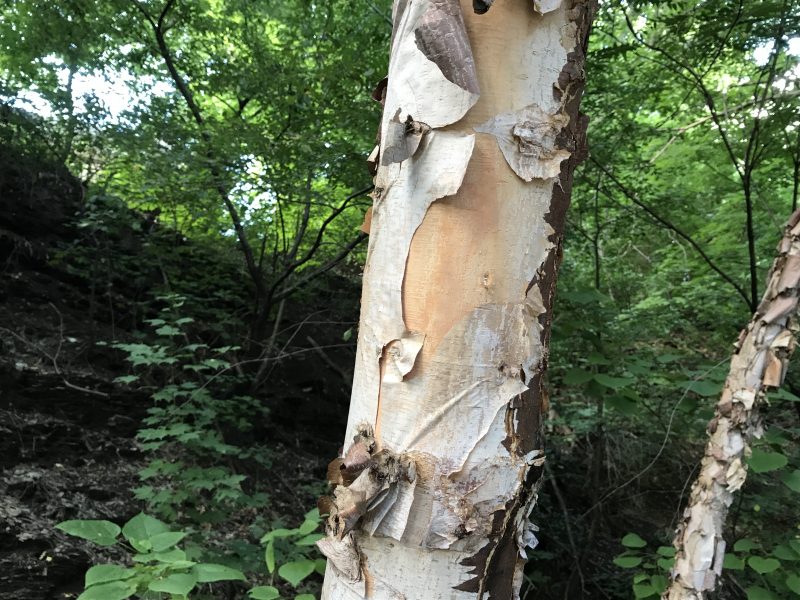 Papery, but not paper birch papery.

Sometimes, just when you think you’re getting better at identifying trees, you’ll encounter one that has more than one kind of leaf on the same plant. You might feel the urge to cry. This is normal. And it might be your experience if you ever encounter red mulberry, Morus rubra. These simple, alternate leaves are fairly deeply lobed. Except when they aren’t lobed. Except when they’re lobed, but only on half of the leaf and the other half is unlobed. They’re all toothed, if that helps.

Lucky for the red mulberry it’s absolutely delicious and great for snacking from late spring through June. Look for dark purple stains on the sidewalk and your neighbors’ hands and faces if you’re unsure of the location of your nearest mulberry tree. Native red mulberries are perhaps most easily distinguished from the introduced and allegedly less-tasty white mulberries by its hairy leaves, red-brown bark instead of yellow-brown, and (sometimes) slightly hairy stems. Plus, you know, the color of the berries. But by berries I mean cluster of drupelets, since mulberries are multiple fruits and not berries. 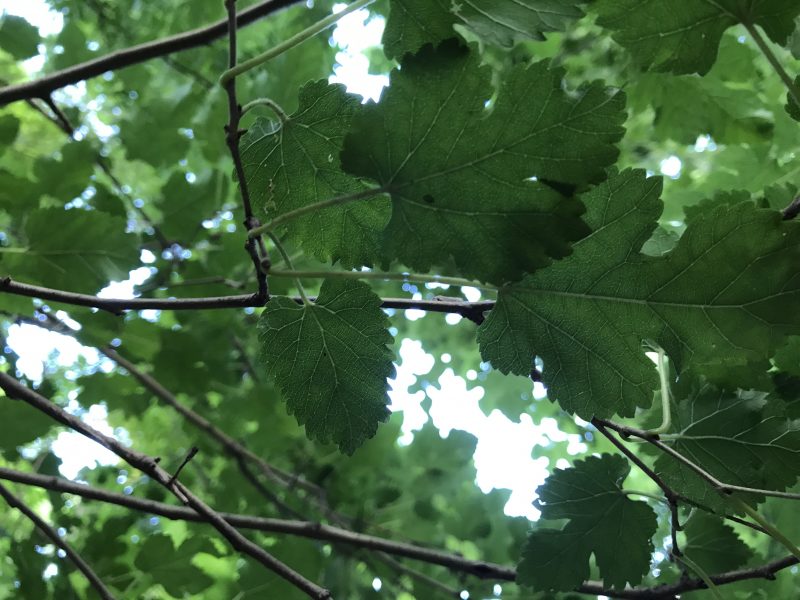 Yeah, these leaves are all on the same plant. I don’t know what to tell you. 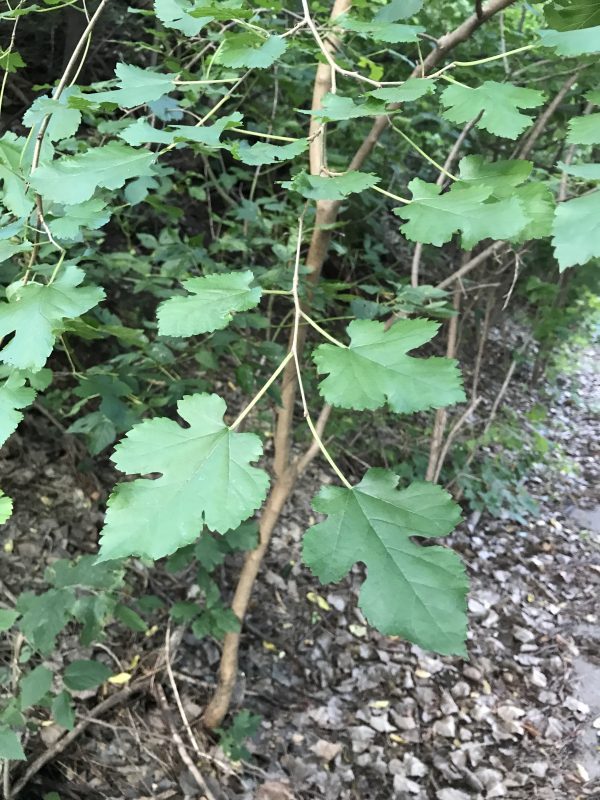 Some deeper lobes. Many of these leaves approach symmetry.

Curing tree blindness doesn’t mean scanning every leaf in the forest. It’s more like a state of mind. The important part is just using your eyeballs sometimes and looking at what’s out there, even if it’s just to marvel at how little you know. It’s tempting to feel overwhelmed, but maybe that’s what discovery is supposed to feel like.